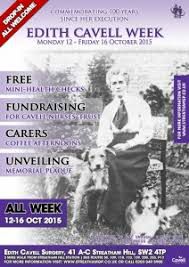 Commemorating our namesake’s centenary of execution – Edith Cavell Surgery will be holding week-long services, activities, fundraising and remembrance for one of healthcare’s best known heroines. See event poster, video and more details below.

Join us on Monday 12 October 2015 for the unveiling of our memorial plaque by our CEO and former Nurse, Susan Sinclair at 5pm – we will be observing a minutes silence and some words of remembrance, together with FREE mini health-checks, carers coffee afternoons and health training sessions throughout the week.

Nurse Edith Louisa Cavell (4 December 1865 – 12 October 1915) was a British nurse and is celebrated for saving the lives of soldiers from both sides without discrimination and in helping some 200 Allied soldiers escape from German-occupied Belgium during the First World War, for which she was arrested. She was subsequently court-martialled, found guilty of treason and sentenced to death. Despite international pressure for mercy, she was shot by a German firing squad. Her execution received worldwide condemnation and extensive press coverage.

She is well known for her statements “patriotism is not enough” and “I can’t stop while there are lives to be saved.”

We are proud supporters of Cavell Nurses’ Trust, Edith Cavell’s legacy charity which provides help for Nurses, Midwives, Healthcare Assistants & students suffering financial or personal hardship. Funds raised throughout the memorial week will be donated to the Trust, and we help to raise awareness and funds for the charity throughout the year.

By clicking Accept, you agree to the use of AT Medics and other third-party cookies and other similar technologies to enhance your browsing experience, analyse and measure your engagement with our content. Learn more in our Privacy Policy. You will not see this pop-up again if you click Accept